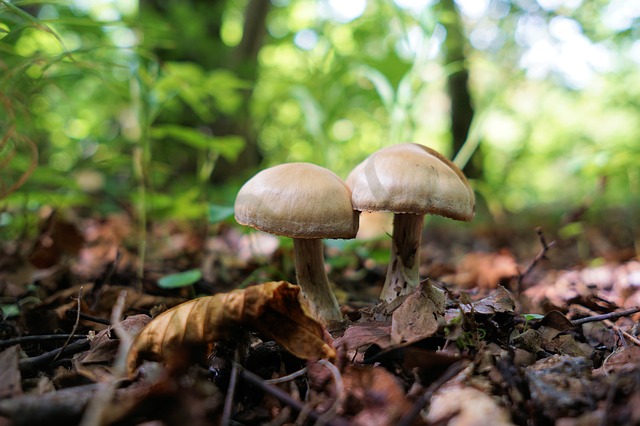 By the time when knowledge was increased, it became known that it was not a result of any magic process, but it has a special method of cultivating them. However, time proved that even though it does not grow from magic, it has magical effect to achieve nutrition and optimize health.

Mushroom cultivation can directly improve livelihoods through economic, nutritional and medicinal contributions. Indirectly, mushroom cultivation also provides opportunities for improving the sustainability of small farming systems through the recycling of organic matter, which can be used as a growing substrate, and then returned to the land as fertilizers.

Mushrooms both add flavour to bland staple foods and are a valuable food resource in their own natural way, they are often considered to provide a fair substitute for meat, with at least a comparable nutritional value to many vegetables.

Mushrooms are a good source of vitamin B, C and D, including niacin, riboflavin, thiamine, and folate, and various minerals including potassium, phosphorus, calcium, magnesium, iron and copper. They provide carbohydrates, but are low in fat and fibre, and contain no starch.

Furthermore, edible mushrooms are an excellent source of high quality protein (reportedly between 19 percent and 35 percent), and white button mushrooms contain more protein than kidney beans. In addition to all the essential amino acids, some mushrooms have medicinal benefits of certain polysaccharides, which are known to boost the immune system
Medicinal Mushroom have routinely been used in traditional Chinese medicine. Today, an estimated six percent of edible mushrooms are known to have medicinal properties and can be found in health tonics, tinctures, teas, soups and herbal formulas. Ganoderma and Lions Mane are edible mushroom with medicinal properties widely diffused and cultivated.
Ganoderma are said to have antitumour and antiviral properties and remove serum cholesterol from the blood stream.

Pakistan exported around 201,000 kilograms (kg) of mushroom with a total export price of $12.930 million in 2016. Not only was the increase in the value of mushroom exports phenomenal but mushroom exports also contributed over 25 percent to the overall vegetables exports of over $101 million the same year.

In Pakistan, mushrooms are grown in farm houses, including but not limited to state owned national logistic cell. Farm production contributes around 1 percent to overall mushroom exports, while the rest of it comes from natural production in Khyber Pakhtunkhwa.
In the rainy season, a large quantity of palm trees is naturally found in the forests. There are two parts of the polymer, upper cap and stem. There is a large number of seeds born on the bottom of the cap that spread across the fields. Where they have an friendly environment. Different types of mushrooms are naturally found in many places in Pakistan. It is locally known as ‘Kundir’, ‘Honda or Gheehi’. The mushrooms found in the northern areas of Pakistan are called “Ghehhi”. Which are naturally considered as the most expensive mushrooms. They are sun dried and are exported abroad.

Pakistan exports 56 types of mushrooms which are worth eating. These include four types from Balochistan, three from sindh, five from Punjab and 44 types from Khyber Pakhtunkhwa and Azad Kashmir. Four popular types of mushrooms are buttons or European mushroom, Japanese mushrooms, Chinese mushrooms and Oyster mushrooms. High quality oysters mushrooms are available in Pakistan, which are further categorized with white ,golden, gray and pink oysters mushrooms. These different types are produced across the country and usually available after Monsoon.

Mushrooms can be cultivated between October and March, they can easily be cultivated in small farming houses. Their are two types of cultivation: cultivated in the open field and controlled (in which a certain temperature and environment is maintained in artificial manner). Seven days after the cultivation, Mushrooms begins to get barrier like cold leaves that turn into mushroom in three to five days.

Their branches are five to seven inches long, and appears dried apart from the plants. These branches are called Flushes and can be cooked or are sold in the market. Within ten days after breaking new branches grows on the plants, fast production makes it very economical.

Dr. Mohammad Nadim, associated with Faisalabad University of Hortical Culture, says that only one branch of mushrooms can get more than half a kilogram of food for every month after every week. So one hundred buds can cultivate 120 kilograms of mushrooms in one week. 150 rupees per kilogram, 18 thousand in a week, and so 72000 rupees can be earned in the month. One pounds of oysters in the US sells around six dollars. The mushroom cultivattion in 200 square feet is 800 pounds in a crop, while around 5,000 pounds of mushrooms can be obtained throughout the year. It costs $ 30,000.

There is an old Chinese saying which states that “MEDICINES AND FOODS HAVE A COMMON ORIGIN”. Mushrooms constitute a most rapidly growing new food category which the current health-oriented public is increasingly enjoying.