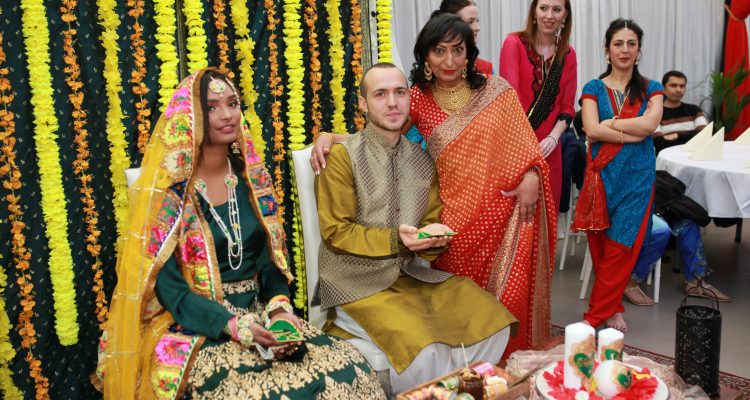 On March 2, PICS arranged a fantastic Pakistani Mock wedding in Stockholm. This was the third series of the Salam Pakistan project that is followed traditionally every year since its inception in 2016. Each year is a new theme and this time it wass the Pakistani Mock Wedding.

The event showed the best of the Pakistani culture through music, dance and beautiful traditional clothing as well as accessories and food. An incredibly enticing venue was filled with 200 wedding guests, who danced to Pakistani music, got henna and ate traditional food.

Committed sponsors and exhibitors stood at another part of the premises, where brides got makeup on the spot, party clothes and accessories were also on sale. Irresistible pastries and ‘chat pati’ chaat were served to the guests.

PICS Secretary Nazneen Ansari shares that Pakistani weddings are definitely the most enjoyable celebration and a must to attend event. Everyone dresses up in his or her dazzling outfit, and large families gather for the organized chaos that comes with wedding planning.

The wedding consists of a series of festive events, as soon as the wedding season is approaching; preparations begin around prospective brides and grooms. Pakistani wedding usually goes on for several days, to make it as short and simple as possible, we have chosen to show the 3 most important ceremonies in the event.

PICS President Shahzad Ansari shares that  “Wedding is one of the key pieces of Pakistani culture. Everyone should be able to attend and experience the Pakistani wedding at least once in his or her lifetime. We can proudly say that PICS team and our partners have succeeded in showing Mock wedding today. ” Before the bride and groom came in, music was played, while the guests mingled, got seated at their assigned seats, and took pictures of the traditionally decorated scene hanging in the background and ceremonial chairs for the bride and groom.

Events hosts were Ghazzal Mehdi and Melody Farsin who are known for their unique way of involving the audience; There comments made the audience retain their excitement throughout the entertainment.

Event’s program began with henna ceremony. The groom Jakob Forslin came in together with his friends dancing danced wildly to the traditional dhol music while the audience welcomes them with a cheer.

The bride Helena Rönngren came shortly after the groom, led by four girls who held a shawl over her and accompanied by girls holding large trays of mehndi.

When the couple sat down on the stage, the audience’s enthusiasm continued and people began to take pictures of the couple. Females started henna ceremony while volunteering participation from the audience played dholki. Dhol is a barrel-shaped or cylindrical wooden drum, which was played by females, while they sang and clap along to the music, bridegroom’s and the bride’s side teased each other through the songs.

Meanwhile, the after longed Finger grabbing ceremony came. Ungli pakrai can be interpreted as Finger grabbing tradition. As you can see in the picture, bride’s sisters came and tried to catch groom’s finger, the idea is to get as much money as possible to the bride’s friends. The most fun thing about this is that the groom, together with his friends tries to bargain down the price as much as possible.

Without dance performance, the henna ceremony is incomplete. Usually it is the family and friends who perform during the wedding but here it had been sponsored by a dance group which performed to Pakistani music.

An incredible work had been done by the PICS team for different scene and decoration, the collaboration for different segments was fantastic. After the henna ceremony, this set-up was taken off and the stage was changed in to Baraat ( A wedding procession).

After the environmental change it was time for the wedding day. The bride Sara Strömberg wore a traditional red dress and the groom Zeke Kucukyildiz wore a beige sherwani, which complemented the bride’s outfit. When the couple came in, the guests cheered and danced to the music, audience got energized when they saw the new couple.

The host, Ghazzal and Melody told us that PICS is a religious and politically unbound association. Because there are different religions in Pakistan, PICS has therefore with all due respect chosen to skip this part. In addition, it is a traditional rich culture with several different elements that could not be shown in the short time.

Following an exquisite appetizer, the most important event came “Rukhsati”, meaning farewell. This is where things get super emotional. Everyone is crying because they know the wedding reception is officially ready and the bride will go to her new home.

Okay, so now is the wedding reception over and you would think the wedding has ended, NO! Its time for Walima.

Romantic music was played and the groom Risto Arcilander, dressed in a suit and the bride Susanna Avetisyan, dressed in a pink long dress – enters the room.

This ceremony is formal and the couple has more handsome outfits like suits and frocks. This ceremony is from the groom’s family and they are the host. It follows with a formal dinner, cake ceremony and couple dancing.

After the cake ceremony it was time for couple dance and guests couldn’t let go of their craving of dance, then it was time for the Pakistani traditional delicious food.

Oh, which menu it was set for the guests.

It was something you didn’t want to miss, I don’t think anyone went dissatisfied that evening because there was a large selection of food dishes.

I want to conclude by mentioning the question why PICS had a Pakistani Mock wedding? Answer is : To give a positive picture of Pakistani culture and tradition.

That’s why we targeted to invite non-South Asians to such an event to show them the cultural and bright side of Pakistan.
And by involving the audience in our traditional ceremonies, we hope that people got a different picture of Pakistan and its people.